skip to main | skip to sidebar

"The old business as usual." That's John McCain's blunt assessment of the Obama administration, on CNN this morning.

Hence the headline atop Reid Wilson's piece in The Hill. And here's the top:

"I'm not happy, and most of us aren't at the lack of true bipartisanship in approaching this legislation," McCain said of the stimulus package during an interview on CNN's "State of the Union."

The eight-pound, thousand-page measure is "the old business as usual," McCain said, criticizing the president for going back on his pledges of transparency.
Posted by James P. Pinkerton at 9:37 AM No comments:

First: "Congressional Offices Don't Have the Stimulus Bill, Lobbyists Do" -- that's the very business-as-usual headline from Paul Bedard at US News, who notes:

We're receiving E-mails from Capitol Hill staffers expressing frustration that they can't get a copy of the stimulus bill agreed to last night at a price of $789 billion. What's more, staffers are complaining about who does have a copy: K Street lobbyists. E-mails one key Democratic staffer: "K Street has the bill, or chunks of it, already, and the congressional offices don't. So, the Hill is getting calls from the press (because it's leaking out) asking us to confirm or talk about what we know—but we can't do that because we haven't seen the bill. Anyway, peeps up here are sort of a combo of confused and like, 'Is this really happening?'" Reporters pressing for details, meanwhile, are getting different numbers from different offices, especially when seeking the details of specific programs.

Second: "The new D.C.: Same as it ever was"--Charles Mahtesian and Patrick O'Connor sum up the situation for Politico: "So much for post-partisanship."

House Majority Leader Steny Hoyer (D-MD) confirmed this afternoon that Democrats will break their transparency pledge by bringing the stimulus bill to a vote tomorrow morning, giving lawmakers and the public significantly less time than the 48 hours promised.
Posted by James P. Pinkerton at 3:22 PM No comments:

If spending, per the previous post, is showing distinct signs of same ol' same ol', this article here, on reorganization of the National Security Council, shows that the Obama administration is thinking fresh thoughts about organizing the government.

If national security adviser James L. Jones means it when he says that he wants to concentrate power in the NSC, well, that's a change.

History tells us that the only way that things get done is through such centralization. That's why the notion of a "czar" is a good one, if the goal is profound change. It's just not possible to get anything done if there are a bunch of people in the room.

One can like or dislike Obama's health care policy, or his energy/environment policy, but from the point of view of supporters, it's a good idea. And the same with a centralized approach to national security policy making.

So count this as a change from business as usual.
Posted by James P. Pinkerton at 8:49 AM No comments:

And this was in the WaPo!

As reporter Robert O'Harrow puts it:

The Obama administration's economic stimulus plan could end up wasting billions of dollars by attempting to spend money faster than an overburdened government acquisition system can manage and oversee it, according to documents and interviews with contracting specialists.

The $827 billion stimulus legislation under debate in Congress includes provisions aimed at ensuring oversight of the massive infusion of contracts, state grants and other measures. At the urging of the administration, those provisions call for transparency, bid competition, and new auditing resources and oversight boards.

But under the terms of the stimulus proposals, a depleted contracting workforce would be asked to spend more money more rapidly than ever before, while also improving competition and oversight. Auditors would be asked to track surges in spending on projects ranging from bridge construction and schools to research of "green" energy and the development of electronic health records -- a challenge made more difficult because many contracts would be awarded by state agencies.

And this skeptical tone reflects the reality of today's media. They are liberals, sure, but many of them are liberal libertarians--"liberaltarians," as Brink Lindsey of the Cato Institute calls them. They don't really believe in this spending stuff.

But as the President said last Thursday night to the House Democrats:

And as this transcript, from whitehouse.gov, shows, the House Democrats loved it.
Posted by James P. Pinkerton at 8:13 AM No comments: 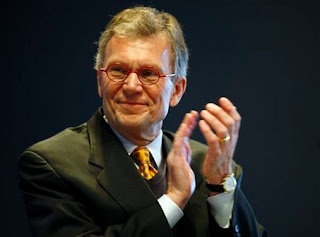 When it comes to dubious people, who flouted the rules, there's not much new here.

But Tom Daschle's little red eyeglasses? Those are new.
Posted by James P. Pinkerton at 8:12 AM No comments:

The Song Remains The Same

Is the "stimulus package" a fresh approach to actually growing the economy, or is it just the same old stuff? Here's Newsweek's Bob Samuelson weighing in on the question, "Will Obama's Stimulus Work?":

The decision by Obama and Democratic congressional leaders to load the stimulus with so many partisan projects is politically shrewd and economically suspect. The president's claims of bipartisanship were mostly a sham, as he skillfully maneuvered Republicans into a no-win position: Either support a Democratic program, or oppose it—and seem passive and uncaring.

But in fact, the BAUI is not convinced that the Obama is good politics--the latest Gallup poll calls its popularity into question.

So bad politics AND bad economics? Wow.
Posted by James P. Pinkerton at 7:49 AM No comments:

Change or No Change? 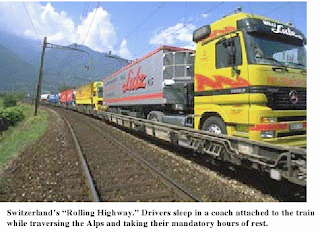 A couple of interesting developments to note for the next iteration of the BAUI.

First, Barack Obama's interview with Al Arabiya TV is a huge deal, and offers (or threatens, depending on your point of view) a hug change in the direction of American policy toward the Middle East. For Obama to say...

But if you look at the track record, as you say, America was not born as a colonial power, and that the same respect and partnership that America had with the Muslim world as recently as 20 or 30 years ago, there's no reason why we can't restore that. And that I think is going to be an important task.

...is to signal a huge change in and of itself. After all, the Bush administration had routinely scorned the previous decades of America ME policy preceding its own tenure, as examples of what not to do. And now Obama is calling the period dominated by Henry Kissinger, Jimmy Carter and Ronald Reagan, in effect, the good old days.

Of course, just because the President says it, doesn't mean that it, whatever "it" is, always gets filtered down through the bureaucracy. As Harry Truman observed about presidential power to historian Richard Neustadt, Dwight Eisenhower would find it tough in the White House:

He'll say, "Do this! Do that!" And nothing will happen. Poor Ike--it won't be a bit like the Army. He'll find it very frustrating.

Eisenhower, of course, proved to be an effective president, although he was hardly a game-changer, especially on the domestic front, where he was content to keep on keeping on with the New Deal and even Truman's Fair Deal.

But that excursion into presidential power aside, the Business As Usual Index focuses on domestic and economic issues, especially as they relate to the way that government works.

And so, second, and more pertinent to the BAUI, we should all be very curious to see what sort of reception Phil Longman, my colleague at the New America Foundation, gets for this visionary infrastructure proposal, "steel wheels," which he will discussing in testimony on Capitol Hill tomorrow.

Phil's proposal--in a nutshell, putting trucks on trains--would save energy, reduce pollution, and create jobs. It's exactly the sort of new idea that any government official should be looking for (even if, obviously, it is based on old ideas, ideas that are already working elsewhere in the world; the picture above is from Switzerland).

Are the Democrats up for it? Are the Republicans? If they are, that will be real change. Stand by.
Posted by James P. Pinkerton at 10:15 AM No comments: